Change in shoreline caused by pyroclastic flows and lahars in the Walibou River, St. Vincent, May 2021. Photo by Fitzgerald Providence, IWEco.SVG. 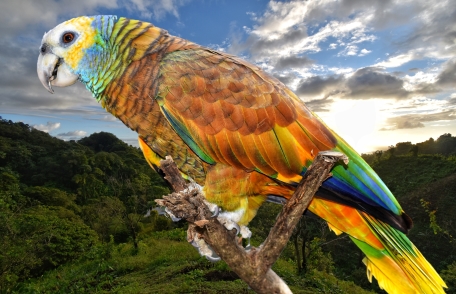 Just south of the majestic La Soufriére volcano, in the central mountain range of the island of St. Vincent, on an early morning you might be lucky enough to see a large and beautiful parrot emerging from the trees, squawking loudly as it greets the day. The St. Vincent Amazon (Amazona guildingii) is the only parrot that inhabits St Vincent and the Grenadines, located in the south-eastern Caribbean.

The plumage of this beautiful bird which comes in two main colour morphs, is so variable that no two birds appear alike.

Endemic, it is the national bird, and is found mostly in the mature rainforest between 125 and 1,000 metres up. Known locally as “Vincie”, it lives here, feeding on the flowers, nuts, fruits and seeds of many plants such as Ficus, Clusia and Cecropia.

Once common, Vincie is now on the IUCN Red List of Threatened Species and listed on Appendix I and II of CITES.  It is increasingly threatened by trapping for the illegal cage-bird trade, deforestation, forest fires, expansion of agriculture, charcoal-production and natural events such as hurricanes and volcanic eruptions, which contribute to habitat loss.

In the 1980’s there were as few as 370-470 birds but today Vincie and its habitat are protected by law and the population has been slowly increasing.  It is still listed as Vulnerable with a wild population of about 750 birds.

The island was built over a volcanic hotspot which created its central mountainous spine rising to 1234 metres above sea level; now covered in rich montane forest and home of the parrot.  According to Fitzgerald Providence, Director of the St. Vincent and the Grenadines Forestry Department, “Parrots were not known to occupy the volcano but have been seen foraging there during a recent exercise.”.

On April 9th 2021,  La Soufriere Volcano began a series of explosive eruptions which reached their peak with the collapse of the dome and the beginning of pyroclastic flows on April 12th, and continued almost daily until recently.  This activity decimated nearby towns, agriculture, affected rivers, and blanketed the entire country in ash. People and animals had to be evacuated out of the danger zone and the country has since been preoccupied coping with a humanitarian crisis, made more challenging by the ongoing COVID-19 pandemic. 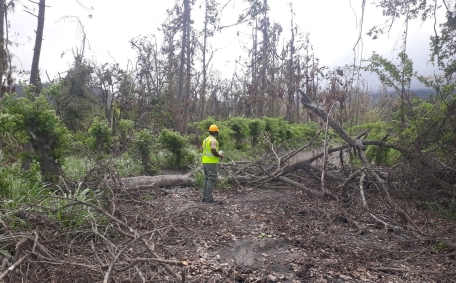 The unpredictability of the volcano led to great concern not only about the inhabitants of the island, but also about the parrots and other wildlife which would have been badly affected in the immediate zone around the volcano.

BirdsCaribbean quickly launched a crowd funding page to assist with rescue and rehabilitation of the parrot.  Several international organizations got involved, including Fauna & Flora International, Caribaea Initiative, Durrell Wildlife Conservation Trust and Rare Species Conservation Foundation.  With the guidance of the St. Vincent Forestry Department and a local NGO, SCIENCE SVG, they began helping with rescue and rehabilitation of the parrots.

Efforts included fundraising to cover the cost of field equipment and supplies needed by Forestry staff, aviary building supplies and veterinary supplies.  Dr. Lisa Sorenson of BirdsCaribbean, in their fundraising call, emphasised that “The most urgent work right now is for teams to be out in the field, covering as much of the parrots’ territory as possible to find out where they are and to look for weak and dehydrated parrots that can be rescued. Since many parrots will have a very difficult time finding food since April 9th when the habitat became blanketed in heavy ash, it is also helpful to put out some food (ripe fruit and nuts) in areas where they are known to occur ASAP.” 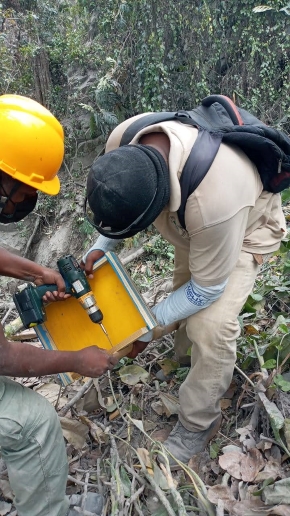 Foresters thought that any parrots in the area of the volcano would have moved to safer zones to the south but there was concern that continuing eruptions would lead to the death of many birds as ecosystems were devastated by the atmospheric gases and heavy ash-fall blanketing the country, as well as by pyroclastic flows.  Teams of foresters used their ingenuity to set up feeding stations for the parrots. Rehab facilities for rescued birds at the Botanical Gardens of St. Vincent received more supplies.

The UNEP GEF-funded Integrating Water, Land and Ecosystem Management in Caribbean Small Island Developing States’ (IWEco) National sub-Project in Saint Vincent & the Grenadines, which began in 2020, to address land degradation in the Georgetown Watershed, a major habitat for the parrot, includes two activities focused on the species. The first is a census to be carried out in July 2021. This has become even necessary following the recent volcanic activity.

The second is thinning of the Blue Mahoe and Mahogany forest plantations located at Perseverance, with the aim of improving stability of the existing forest plantation as well as diversity through natural regrowth of indigenous forest tree species.  This would increase the parrot’s living area significantly.

There are also plans to develop the Jennings Bird Watching Trail, an existing forest patrol trail. This is expected to result in spin-off benefits for the community, through jobs linked to the provision of services, accommodation, trail guiding and selling of indigenous, local branded souvenirs.

The forests of St. Vincent provide a home for the St Vincent Parrot and so many other valuable species.  In addition to their aesthetic value, they stabilize the land, prevent flash flooding, and are used for traditional medicines, fuel, ornamentals, craft and construction; in fact, they provide a range of ecosystem services.  Yet, according to a 2004 study, they were being lost at an annual rate of 3%. 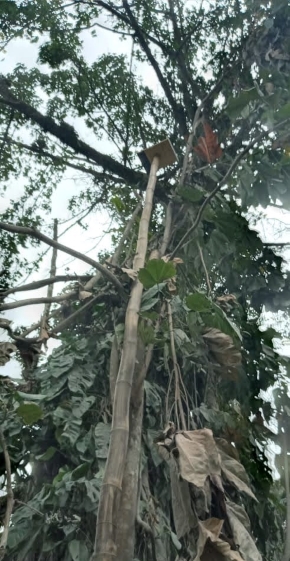 The last word goes to Fitzgerald Providence: “The eruptions of La Soufriere have brought challenges and opportunities to our lives and livelihoods as Vincentians. The IWEco.SVG project was a response to severe damage caused to the Georgetown watershed by an unexpected trough system in 2011 which caused extensive flooding, soil erosion and infrastructural damage.  Now, more than 30 explosive eruptions of La Soufriere have dumped tonnes of ash on the island, damaged vegetation and covered the forest floor on these vulnerable, steep slopes with ash.  There will be further damage by the heavy rains of the wet season, which is just beginning. We must be observant and responsive, and work with the forest environment to ensure that our island’s precious land and biodiversity are protected for future generations to enjoy.”

Thank you to Nandani Bridglal for allowing us to use her photo of the St. Vincent Parrot (above) , taken in 2020 and set against the Jennings Valley in central St. Vincent, one of the main places where Amazona Guildingii can be seen in the wild.

All other photos in this article were taken by Fitzgerald Providence, Director of the St. Vincent and the Grenadines Forestry Department.