Cultivating vanilla to support the forest and sustainable livelihoods 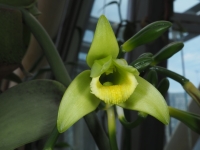 The IWEco Saint Lucia National Project is using an innovative approach to forest conservation and sustainable land management by training farmers to cultivate vanilla, an increasingly precious commodity, in the south of the island. The training was launched in April 2021 at Barre D’Isle in the Dennery Forest and was facilitated by Mr. Karl Augustine, the IWEco Saint Lucia National Project Coordinator and a team from the Forestry Department, Ministry of Agriculture. According to Mr. Augustine, they hope to eventually expand to the Fond Doux Coastal Zone and scale up cultivation in the Soufriere watershed.

Vanilla is a popular and well-loved spice used across the world in beverages, ice-cream, baking goods, cosmetics as well as for industrial purposes. It is ranked as the second most expensive spice in the world (after saffron) due to the labour-intensive nature of its cultivation (it must be pollinated by hand). Tridge.com, a global sourcing hub for food and agriculture products, lists the price of vanilla from Madagascar for April 2021 as roughly $500 USD per kilogram. In Saint Lucia, at the time of writing, it retails for $5-$10 XCD per vanilla bean ($1 USD= $2.70 XCD).

While one driver of the cost of vanilla is its cultivation, another driver is supply and demand. Vanilla is an orchid, which takes 3-4 years to come to harvest, during which time it can be damaged by storms, hurricanes, forest fires, flooding, all of which are increasing in frequency and intensity due to climate change, with the potential of wiping out a farmer’s vanilla crop in an instant. Although native to Central America, Madagascar is now the world’s leading supplier but the Caribbean also has the right climate conditions to support its cultivation.

The global rise in health consciousness has led the food industry to move away from the artificially made Vanillin (the main compound in vanilla) and towards natural vanilla. This shift is significant for the Caribbean, because, according to Mr. Augustine, in the 1940s and 1950s vanilla was a significant agricultural earner for Dominica and Saint Lucia; the region was home to a robust vanilla farming sector. However, the global food industry’s shift away from natural vanilla and towards artificial vanilla caused many farmers in the region to stop growing vanilla.

Young farmers have not been venturing into vanilla cultivation, and as farmers who know how to grow vanilla get older there has been a decline in traditional knowledge of its cultivation in Saint Lucia. Now, with the help of the IWEco Saint Lucia National Project, a new generation of farmers are learning to help Saint Lucia re-enter the industry in a significant way and contribute to forest restoration efforts whilst doing so. 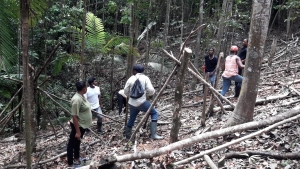 The vanilla training sessions aim to build knowledge of best practices for vanilla cultivation as well as to restore and uphold traditional knowledge of vanilla cultivation. The sessions are each approximately 4-5 hours long and run for a total of 9 weeks. They include: an introduction to vanilla management, vanilla plot management, new plot establishment, and vanilla plot extension and management. Practically speaking, they aim to teach participants the history of the vanilla flower, as well as how to grow, manage and cultivate it. They are also taught how to identify the most suitable sites for vanilla cultivation as the plant is an orchid vine which is known to like shade and is traditionally grown by attaching the vine to a tree. The sessions also focus on how to sustainably prepare the site for vanilla cultivation, and how to repeatedly carry out plot management and/or vine husbandry activities. Participants learn how to control weeds, use plant cuttings, set up a trellis (a system to support the vanilla vine as it grows) and pollinate the vanilla flower by hand, as the melipone bee which pollinates the vanilla flower is native to Mexico, and not found in Saint Lucia.

The use of the trellis is particularly important, as the Saint Lucia National Project has identified that it is more practical to use trellises to grow vanilla. Placing the vanilla vine on a living tree means that when that tree grows exceedingly tall, it becomes more challenging, and eventually impossible, for the farmer to continue to cultivate, as the beans are by then, out of reach for hand pollination. As a counter to this, the project is using trellises made of aged wood sustainably sourced from old plantations. The trellises are 6-7 feet high and are arranged as a tepee. Whilst in initial experiments the Saint Lucia National Project found that the vanilla flower did not do well on the first set of trellises, after experimenting with different types of wooden trellises (in efforts to mimic the natural growing conditions of the vanilla orchid vine) they were able to design a system that the vanilla orchid can be cultivated on successfully.   Following the training, the farmers are given a plot of land (one acre each) in the forest to cultivate vanilla. The teepees are constructed under the trees which provide much needed shade to the vanilla orchids and, in this way, farmers are incentivized not to cut or remove the trees in their forest plots. 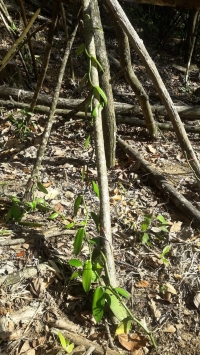 Following the recent passage of Hurricane Elsa, although one tree was blown down, the trellises were not damaged.  According to Karl Augustine, “The plot has been expanded to five or six times the original size …to about half an acre, and three months after planting in May, most of the vines have survived and are showing good growth.”  He noted that, “A few vines were accidentally planted upside down but as maintenance, namely weed control, is being done, the vines that were planted upside down have been re-planted right side up.”  No doubt, there will be many more lessons learned before the first vanilla pods are harvested!

By August 2021, the project had trained 20 locals as well as 20 forestry rangers in vanilla cultivation. It is revitalizing vanilla cultivation on the island, ensuring that traditional knowledge of the management of the crop is not lost, creating sustainable livelihoods, and enhancing the economic viability of the island’s agriculture sector. Most importantly, this agro-forestry activity is contributing significantly to conservation efforts and sustainable land management by giving farmers a financial reason not to destroy the forest.